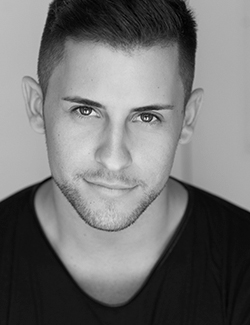 Chris began his training at the Vanessa Lee Dance Academy in Wollongong, a school where he now teaches future generations of performers. He completed his Certificate IV in Performing Arts at the Brent Street Studios before embarking on an exciting journey as a featured dance on Carnival Cruise Lines.

Upon his return, he was cast as a soldier in the Ben Hur Arena Spectacular and then in the ensemble of independent production The Island Of Doctor Moron and the Michael Jackson Tribute Concert Gone Too Soon.

Chris has also appeared on So You Think You Can Dance Australia, Dance Academy and is the face of Close Up
Toothpaste in India.

With looks that rival Prince Charming, Chris is a regular on
the catwalk featuring in style sessions and fashion parades at various Westfield “Fashion Weekends” with superstar stylist Donny Galella.

Chris is incredibly excited to be part of an incredible cast bringing the classic fairy tale Cinderella to life.