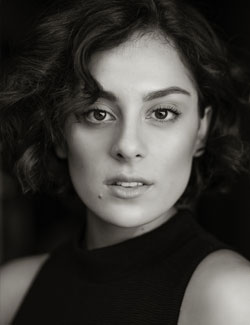 From a young age Anastasia has worked professionally on stage and in film/TV. Most recently, in December 2018 she returned to Australia from a contract abroad in Macao working professionally as a performing artist for Sands Entertainment and as the host for kids show, The Little Big Club – (Smile Live Entertainment Ltd.)

Devoting 17 years of training to each drama, singing and dance she has earned multiple leading roles in theatrical productions as well as on screen such as the starring role in award winning ABC TV series ‘My Place’ as Sofia. This incredible experience kick started her professional acting career from 10 years of age, performing alongside multiple acclaimed actors. This performance as Sofia was so well received by high profile Theatre and Film practitioners, as well as audiences, that it presented her with a ‘LOGIE’ nomination for the prestigious Graham Kennedy Award for “Most Outstanding New Talent” up against countless household names at Australia’s most exalted red carpet event. She was also an AFI/AACTA award candidate for this role.

Since then, she featured in a short film “Youth off the Streets” where internationally acclaimed singer, P!NK was a supporting artist, sponsoring the cause and appearing in promotional cuts of film which aired in cinema ads, on morning shows like Sunrise and online. Also featuring in other television and internet commercials.

Anastasia had the pleasure of receiving the Mark Santos and Anthony Hill CAT Award for Best Actress in a Leading Role in a Musical for playing in Chicago as Roxie Hart. Other stage credits include West Side Story, Addams Family the musical, Legally Blonde the musical where she received a CAT nomination for the role of Vivienne Kensington, Beauty and the Beast, Nessarose in Wicked, and as Diana Morales in So Popera Productions’ A Chorus line.

Anastasia has received vocal training from Charmaine Gibbs and studied at Wollongong Conservatory of Music under mentoring from Greg Shand, Karen Cummings and Mara Davis and is a 2016 graduate of Wollongong High School of the Performing Arts. Other notable training includes NIDA short courses and masterclasses with industry legends such as Broadway’s Sierra Boggess. Anastasia is extremely thrilled to bring Princess Jill to life among Australia’s finest!