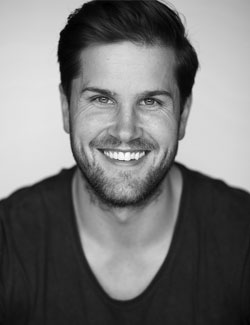 Since graduating from Actors Centre Australia (‘10) Daniel has acted across both stage and screen. He enjoys working both in front of the camera and behind, having completed at BA – Media In Screen Production & Radio Broadcasting at Macquarie University (‘13), and is a strong advocate for developing theatre through Western Sydney.
His recent musical credits include: Danny in Grease (‘13), Curly in Oklahoma! (‘14), A-Rab in West Side Story (‘16). Daniel also currently stars in the the ABC KIDS TV’s ‘SplashDance!’, and tours nationally with the all-singing-and-dancing live show.

Daniel is thrilled to be joining the OzPanto team for this exciting production of Sleeping Beauty: A Knight Avenger’s Tale as Prince Valiant!