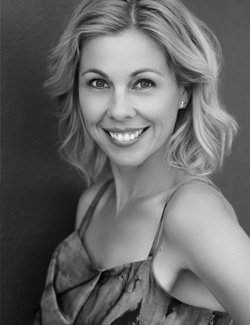 Katrina is one of Australia’s foremost leading ladies with an ever-growing list of theatre, film and television credits to her name.
She most recently performed in the Hayes Theatre Company’s production of Big Fish as ‘Sandra Bloom’. She was also in Sydney Theatre Company’s Wharf Revue, alongside comedy legends Jonathan Biggins, Drew Forsythe and Phillip Scott. Other recent performances include Ruthless! The Musical, with Katrina winning rave reviews for her lead role in the hilarious showbiz satire, earning her a Sydney Theatre Award nomination for Best Actress in a Musical. Prior to that, Katrina’s dramatic talents were on vivid display in her role as ‘Trina’ in the Tony Award winning musical Falsettos at the Darlinghurst Theatre Company and her riotous turn as brash Oklahoma heiress ‘Jolene Oaks’ in Dirty Rotten Scoundrels earned her a Sydney Theatre Award.

As the high voltage ‘Alice Beineke’ in the New Theatricals’ production of The Addams Family under renowned director Jerry Zaks, Katrina received outstanding critical acclaim and a Helpmann Award Nomination for Best Female Actor in a Supporting Role in a Musical.

Earlier roles include ‘Liz’ in Every Single Saturday with Les Currie Productions in which Katrina garnered a Glug Award Nomination for The Colleen Clifford Memorial Award for Best Actress in Musical Theatre, No Way to Treat a Lady in the role of ‘Sarah Stone’ where she received a Sydney Theatre Award Nomination for Best Performance by an Actress in a Musical, A Little Night Music as ‘Charlotte Malcolm’ with Opera Australia, Wind in the Willows with the Australian Shakespeare Company, Jekyll & Hyde with Tim Lawson Enterprises, Las Vegas The Musical as ‘Francesca Carlucci’, in Gale Edwards’ Company as ‘Sarah’ opposite Simon Burke and South Pacific under the direction of John Diedrich, winning A Glug Award “A Performer on the Way” for her portrayal of ‘Nellie Forbush’. Other credits include I Love You, You’re Perfect, Now Change, Songs For A New World, Emperor’s New Clothes for Kookaburra Theatre Company, Hello Again for Darlinghurst Theatre Company, ‘Guenevere’ Camelot for The Production Company. Other theatrical credits include Harrison Productions and Auspicious Arts Projects Julian Assange story Stainless Steel Rat and Critical Stage’s tour of A Day in the Death of Joe Egg. Katrina Retallick wrote and performed in her one-woman show called Impossible Blonde, which featured songs and stories of iconic blonde performers such as Marlene Dietrich, Marilyn Monroe, Julie Andrews and Doris Day among many others.

Katrina has been a regular cast member in Channel Nine’s Logie nominated sketch show Comedy Inc for four seasons, and has also appeared on The Chaser’s CNNN and Backberner for the ABC. She will soon be seen in the fourth season of Nine Network’s much-loved drama, Love Child.