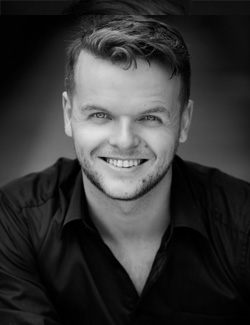 Matt Geronimi is truly a versatile Artist who is trained in all aspects of the Performing Arts. His skill across all genres of dance saw him finish in the Top Ten on the third season of Channel 10’s So You Think You Can Dance Australia.
Matt began his career as a champion Ballroom and Latin dancer; he has earned numerous prestigious titles such as Australian Junior Champion, Australian Youth Finalist as well as representing Australia at the World Latin & Ten Dance Championships.

So far in his professional career, Matt has appeared as a regular dancer on The X-Factor, contributed his tapping talents to the films Happy Feet and Happy Feet 2, appeared on stage with recording artists including Ricky Martin and Jessica Mauboy, performed in shows for Royal Caribbean Cruises aboard ‘The Rhapsody’ and the ‘Navigator’ and has toured nationally and Internationally with Illusionists and Illusionists 2.0 as a featured dancer and Magician’s assistant.

More recently Matt has been seen performing in the last four pantomimes with Bonnie Lythgoe Productions. “Snow White; A Winter Musical, Aladdin and his wondrous lamp, Cinderella and last year Matt played the role of pirate Hoo in Peter Pan as well
as dance captain and assistant to choreographer Juliette Verne, This year Matt is thrilled to be once again performing with Bonnie Lythgoe productions in the role of Chambers and also has taken on a new role as Production Coordinator.