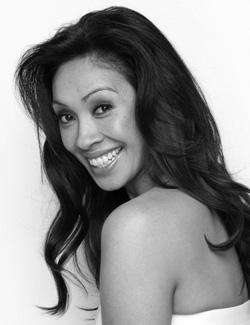 Robyn Loau is an Australian singer, songwriter and actress.
During 1991–1994 she was lead singer of pop group phenomenon, Girlfriend,
who had worldwide hits including the much-loved Take It From Me. During this
time, Robyn’s face was plastered on magazine covers across the country and she
was often mobbed by fans in shopping centres and airports. Girlfriend’s debut CD,
Make It Come True, sold over 140,000 copies. Upon its release and the CD became
Australias highest selling debut CD (until Silverchair’s Frogstomp). After leaving the
group to become the face and voice of world music project Siva Pacifica, Loau
launched her solo career in 1997 with the Adamski-produced single Sick With Love
and the debut album given a 4/5 star rating from Rolling Stone magazine. Her most
recent album Only Human featured songwriting and/or production input from Josh
Abrahams, Davide Carbone, Skin and Len Arran (Skunk Anansie) and Adamski.
Robyn starred in the movie Idiot Box, directed by David Caesar. Idiot Box drew
warm reviews from critics internationally and debuted at number 10 at the Australian
Box Office. Robyn played the female lead role of Lani, a drive through bottle
shop attendant, alongside actors Ben Mendelsohn and Jeremy Sims. In the late
nineties, Robyn Loau also appeared in the Paul Fenech directed film Somewhere
in the Darkness. Roles in critically and commercially successful TV dramas such as
Wildside and All Saints further cemented a promising acting career.
Peter Pan and Tinkerbell is Robyn’s first foray into panto. When asked if she is
nervous Robyn says “Show me a stage covered in glitter, magic and fairy wings, and
I will show you where I feel most at home. I can’t wait to get out there!”