Lucy Durack to star in new Jack And The Beanstalk pantomime Courtesy of the Daily Telegraph

Musical theatre star Lucy Durack is taking on a role her three-year-old daughter Polly will love — playing the fairy princess in a new pantomime production of Jack And The Beanstalk.

Lucy Durack’s three-year-old daughter, Polly, still talks about the pantomime she saw when she was two.

Durack’s friend Jaime Hadwen was playing Tinkerbell in Peter Pan, and the musical theatre star took her little girl to see it.

“Polly still says to Jaime, ‘remember when you were Tinkerbell and you wore rollerskates?’,” Durack said.

“It’s pretty incredible. I didn’t realise you have memories that early.”

Durack will make even more special memories for little Polly when she plays the fairy princess in producer/director Bonnie Lythgoe’s production of Jack And The Beanstalk.

The show will be on at the State Theatre from July 12 to 21.

Unusually for the very old and traditional art form of pantomime, Jack and the Beanstalk will include a 3D animation of the giant. He’s bound to prompt lots of delighted screams when he looms out of his castle towards the audience.

Hi-5 member Lachlan Dearing will play Jack, who gets into trouble with his mother when he returns from the market with a handful of beans instead of money.

Kath and Kim’s wonderful Peter Rowsthorn will play the role of King Crumble.

Durack is used to playing classic fairy or princess-style roles. She played Glinda the good witch in the Australian production of Wicked, and again in The Wizard of Oz musical.

And she’s a major fan of pantomime since seeing Peter Pan with Polly.

“It’s the sort of show you can bring little kids and they have great fun,” Durack says.

The woman behind that production of Peter Pan was Bonnie Lythgoe.

Lythgoe is a UK-born former dancer who has championed pantomime in Australia since producing her first show here in 2014.

Jack And The Beanstalk will be her sixth show here, and the first with 3D. She borrowed the idea from recent productions in the UK — the traditional home of panto.

“I think we have to move to that technology,” Lythgoe said.

“Kids are into computers, so let’s make sure they can be part of the show.”

Like Polly, Lythgoe saw her first panto at age three or four, in the UK. Again, it was Peter Pan.

“I remember it like it was yesterday,” Lythgoe said. 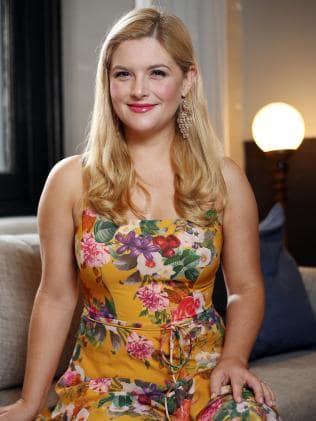 Actress Lucy Durack has taken on a new role in Jack And The Beanstalk. Picture: Sam Ruttyn