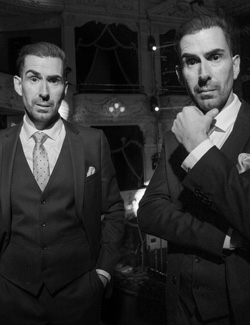 The Twins FX were recognised as part of the creative team who helped Qdos Entertainments achieve their Olivier award in London in April 2018. Dick Whittington at the London Palladium was nominated in the category “Entertainment and Family”. It’s the first time that a pantomime has won such a prestigious award and a first for Pantomime in London’s Westend.

The Twins FX is led by identical twins Gary and Paul Hardy-Brown, located in Wareham in Dorset.. “Coming into work is never boring or a chore because we genuinely love what we do,” says Managing Director Gary. They have a core team of 8 staff but at their busiest, there are as many as 30 model makers, painters and engineers working away in their workshops, like a crack team of seasonal elves.

“We have pioneered flying in recent years with the bespoke system “Flying without wires”; the audience sees a person or an object move around the stage and then the auditorium with no visible means of support”. Paul, Creative Director, continues : “We are a one stop shop and we do everything ourselves: designing, creating/building and delivering the wow factor”.

Our slogan is, we make the impossible…….. possible.”

Starting out as holiday season Bluecoats, delivering captivating magic and illusion shows as part of Pontins’ entertainment program, the twins worked this up into a slick double act which then proceeded to tour around the world for 15 years, becoming bigger and more ambitious as the years went by. In 2004, The Twins were commissioned to create Cinderella’s Fairy Godmother to fly over an audience, which steered them towards special effects and away from performing.

Since then they have established themselves as the market leaders in large-scale theatrical effects, working on arena shows such as Jeff Wayne’s ‘War of the Worlds’, Dr Who Live and the UK tour of Barnum and ‘Hamlet’ with Benedict Cumberbatch in the title role. The Guardian said of The Twins FX’s contribution to the ‘Hamlet’ production – “the effects are striking”. Timeout applauded the “visually and atmospherically stunning productions”. The TwinsFX added effects into London’s West End musical ‘Thriller LIVE’ and “Impossible” – the world’s greatest illusionists live on stage in a magic spectacular. In 2016 they helped to bring Pantomime back to London’s West End after 25 years, with the much acclaimed production of Cinderella. They have also created stunning effects for all three Butlins resorts, ITV’s ‘Keep it in the family’, BBC’s Michael McIntyre’s ‘Big Show,’ ITV’s ‘The Next Great Magician’, ITV’s hit drama ‘HIM’, ITV’s ‘Britain’s Got Talent’ and ITV’s and ‘Tonight at the London Palladium’. The Twins FX have also supplied effects for Hollywood Blockbuster movies, ‘Now You See Me 2’, ‘The Mummy’ and have even supplied effects to the heavy metal band Avenged Sevenfold’s latest music video….

The Twins FX were also lucky enough to have been nominated and then won Best Special effect at the Great British Pantomime awards 2018. Paul and Gary from The Twins FX attended the glittering ceremony in London in April along with a number of stars from stage and screen.

The Twins FX are involved in over 34 pantomimes and Christmas shows this year but it’s great to kick things off, bringing Pantomime to Australia again…
Click with The Twins FX www.twinsfx.com
Twitter @thetwinsfx Facebook TheTwinsFX