Panto has been successfully attempted abroad. It has proved popular in countries such as Canada, Australia and South Africa-, Zimbabwe! In America this very British art form has fared less favourably, although in 1868 a production of “Humpty Dumpty” ran for over 1,200 performances at the Olympic Theatre, New York, making it the most successful Pantomime in American history. 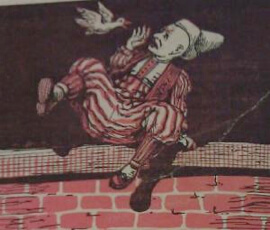 In the United Kingdom, the word “Pantomime” means a form of entertainment, generally performed during the Christmas season. Most cities and towns throughout the UK have a form of Panto at this time of year. The origins of British Pantomime or “Panto” as it is known date back to the middle ages, taking on board the traditions of the Italian “Commedia dell’ Arte, the Italian night scenes and British Music hall to produce an intrinsic art form that constantly adapted to survive up to the present day. Pantomime, as we know it today is a show predominantly aimed at children, based on a popular fairy tale or folk legend. The most popular subjects being “Cinderella”, “Snow White” followed by “Aladdin”, “Snow White” and popular a “Jack & the Beanstalk “. Rising in popularity is “Peter Pan”, not strictly a panto, but a children’s story, based on J.M Barrie’s play. “Peter Pan” first performed at the Duke of York’s Theatre, London in 1904 transferred successfully to America shortly afterwards. Today the story has had elements of Pantomime introduced, and is one of the highly popular Christmas shows around the British Isles. Panto has combined many elements of theatre throughout its existence, and by adapting it has survived. The element of “novelty” has always been to the forefront, as has its ability to encompass modern trends and topicality, within its structured framework. People talk about “traditional” panto, but to remain popular this form of theatre has had to keep its eye firmly on modern trends, and by weaving these into its format, remains one of the most popular forms of entertainment in this country.


One element that a panto should have is a strong story line. The fairy tale has to be well told, incorporating the important elements of good battling against evil, and emerging triumphant. In this respect, the concept varies little from the medieval morality plays, performed on village greens. Even to the present day “tradition” dictates that the Pantomime villain should be the first to enter, from the “dark side”, stage left. His adversary the good fairy or good spirit will then make her entrance from stage right. This echoes the medieval tradition in when the entrance to heaven was placed on stage right and the entrance to hell was placed on stage left. Panto will always remain an intrinsic jewel in our crown. A visit to a pantomime may be a child’s first experience of live theatre. If that experience is magical enough, it can leave a lasting impression. The tradition will continue on and on, Big children (the adults) and small children will always shout and scream “Oh yes it is!” when prompted as loudly as ever.

The even more traditional onstage “Ghost Routine” will forever prompt children of all ages to cry out “It’s behind you” as the ghostly image creeps up behind the unsuspecting cast members on stage.