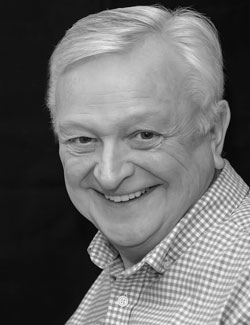 Malcolm trained at Mountview Theatre School in London and has worked extensively in theatre and television. With nearly 40 years’ experience, in all aspects of theatre and television, he has played a wide range of interesting roles, ranging from Hansel in the opera Hansel and Gretel to a parrot at a Royal Variety Performance for HRH The Prince of Wales. His main claim to fame though is appearing for 13 years in the classic children’s programme Rainbow for Thames TV, initially playing George the pink hippo and then taking on the role of Bungle bear. Forty years after their conception, Bungle, George and Zippy are still in demand. Malcolm is no stranger to pantomime: this is his 27th consecutive year, appearing in several versions of Jack and the Beanstalk, Aladdin, Snow White, Cinderella and Dick Whittington. Many of these were with the legendary John Inman. Malcolm took a few years’ break from being dame, one year playing Santa in Santa Claus – the Musical and the next year playing Friar Tuck in Robin Hood. He was thrilled to return to playing the dame, with the role of Sarah the Cook for Qdos Entertainment at Wycombe Swan and Orchard Theatre, Dartford, both starring Shane Richie. Malcolm then brought back his well-known character Bungle Bear to star in Pizza Hut’s TV commercial in 2017. Last year he was delighted to join Qdos Pantomimes once again in Crewe, appearing in Jack & The Beanstalk as Dame Trot after the successful run of Snow White and The Seven Dwarfs in 2017.